Neuroinflammation is a major driver of cognitive deficits and the development of neurological disorders. The vagus nerve plays a critical role in regulating physiological responses to resolve neuroinflammation. Vagus nerve stimulation (VNS) is FDA-approved to treat several disorders linked to neuroinflammation including epilepsy, depression, and migraine. Worldwide, more than 100,000 patients have received VNS therapy. However, VNS typically requires surgical implantation of electrodes making it impractical for acute or ambulatory settings. Although transcutaneous VNS devices exist, their ability and specificity to engage relevant target nerve fibers are limited. There is a need for a minimally invasive, specific, and effective VNS procedure.

Duke inventors have developed a minimally invasive VNS procedure. This is intended to be used in the clinics to treat multiple neurological disorders that have been linked to neuroinflammation, including postoperative cognitive dysfunction, epilepsy, depression, and migraine. Specifically, the inventors have developed a percutaneous method to accurately deliver electrical stimulation to the vagus nerve using ultrasound-guided needle electrode placement. The needle positioning uses anatomical landmarks around the neck area to achieve specific engagement of the right cervical branch of the vagus nerve fibers. After the procedure, the needle electrode can be safely removed. This method has been demonstrated to effectively resolve inflammation and restore memory deficits in a mouse model of inflammation-induced cognitive dysfunction. 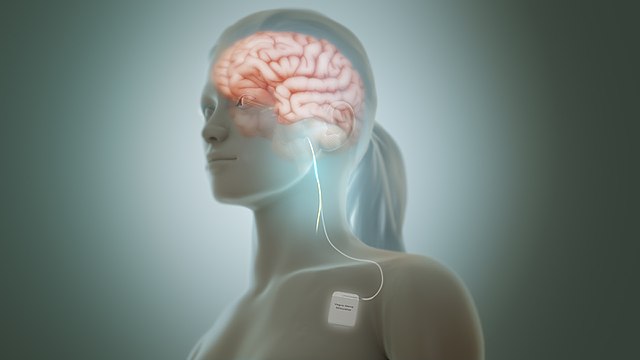