Since insulin was used as the first therapeutic protein in a clinical setting, the field of protein therapeutics has rapidly expanded. From 2014-2018, therapeutic proteins had the highest compound annual growth rate of the biologics market, more than monoclonal antibodies or vaccines. This trend is predicted to continue for the next four years as well. However, one of the biggest challenges to be addressed for protein and peptide therapeutics during clinical application is their fast degradation and quick elimination from the body, dictating multiple and frequent injections which can cause undesirable side effects. There is a need for improving the half-life of therapeutic proteins and peptides for applications such as reduced number of insulin injections for diabetic patients.

Duke inventors have reported a novel drug delivery system for increasing the half-life of therapeutic proteins and peptides. This is intended for use in a wide variety of biomedical applications, where the combined product forms a gel-like structure resulting in drug depots with sustained release. By fusing the designed elastin-like-polypeptides (ELPs) to proteins of interest, these polypeptides can impart reversible or irreversible conformational change and self-assembly upon exposure to environmental stimuli such as temperature, pH or buffer ionic strength, which can be utilized for drug delivery and tissue engineering applications. In this case, the thermosensitive ELPs create an injectable depot that undergoes a soluble-insoluble phase transition between room temperature and body temperature. The design principles reported by the inventors have been demonstrated with animal studies, including drug depots that achieved 10 days of glycemic control in diabetic mice. The inventors are also investigating injectable depots for the intratumoral delivery of immunotoxins and for the sustained and tunable release of antigens and adjuvants for the development of vaccines.

In addition to drug delivery, this technology could be used for a variety of other biomedical applications, including tissue engineering and diagnostics. 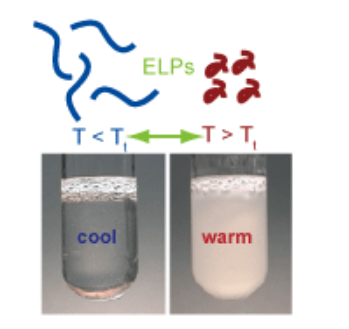