Rapid molecular screening test for the diagnosis of radiation exposure

The threat of terrorism via detonation of radiological weapons or improvised nuclear devices remains a major public health and national security concern. Victims exposed to high doses of ionizing radiation develop acute radiation syndrome, which can result in life threatening failure of the hematopoietic and gastrointestinal systems. Often, the effects of severe radiation exposure develop slowly over weeks or months and current methods, such as observing when radiation sickness appears, are imprecise and fail to identify the extent of long-term injury to the bone marrow and other organs. Some of the effects of radiation exposure can be reduced if suitable treatment is started immediately after exposure, and thus before the appearance of radiation symptoms. Unfortunately, there is no rapid and accurate way to determine who was exposed and whether the level of exposure is lethal. It currently takes several days to estimate the amount of ionizing radiation to which an individual has been exposed using a dicentric chromosome assay. There is a need for a rapid molecular screening test which is suitable for the triage of large numbers of radiation injury victims in the event of a radiological or nuclear disaster.

Duke inventors have developed a rapid molecular screening test for the diagnosis of radiation exposure, also known as a biodosimetric assay. This is intended to be used to facilitate triage of irradiated and non-irradiated individuals in a mass casualty scenario involving radiological weapons. Specifically, the technology makes use of an 18 gene human radiation classifier that can both distinguish irradiated from non-irradiated human peripheral blood cells with 100% accuracy and predict radiation dose levels with high accuracy. The technology incorporates the genes from this human radiation signature into a rapid and high-throughput chemical ligation-dependent probe amplification assay (CLPA) that can provide results in less than six hours. This has been demonstrated by analysis of irradiated mice, ex vivo-irradiated human peripheral blood and humans treated with total body irradiation.

This technology could also be applicable in the prediction of radiation toxicity in patients undergoing therapeutic radiation treatments, such as cancer patients. 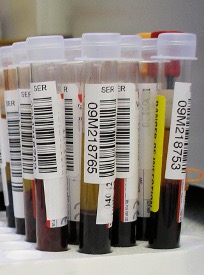