Mammals are capable of detecting and recognizing a large number of odors. Olfactory receptors (ORs) play a crucial role in detecting and recognizing odorant molecules. There has been growing interest in elucidating the patterns of odorant-ORs interaction fueled by their potential to be utilized in various fields including industrial monitoring, clinical diagnosis, environmental protection, food safety and national security. Conventional in vitro systems used to identify odorants are in liquid phase, which limits their applicability. This is very distinct from the physiological conditions where odorant molecules reach the olfactory epithelium in vapor phase and activate ORs by dissolution into the nasal mucosa. Therefore, there is an ongoing need to develop methods of volatile odor detection that better mimic the olfactory system to operate in more realistic settings.

Researchers at Duke University have developed a platform for detecting and discriminating odorants of interest presented in vapor phase. This is intended to detect specific volatiles for fields such as the fragrance industry, explosives and illegal drug detection, diagnostics, and malodor control. In addition, this system permits to discriminate specific patterns of chemical mixtures associated with diseases such as microbial infections. The cell-based platform enables the identification of the best combinations of olfactory receptors to detect and discriminate targeted odorants among structurally related chemicals. Real-time monitoring is accomplished using the Glosensor assay, a luminescence assay previously used with liquid odorant stimulation. This technology has been demonstrated in the lab to detect small differences in chemical structures, and it permits the reliable discrimination of individual odorants even when present in complex mixtures, when used with highly selective olfactory receptors. Alternatively, activation patterns of a panel of broadly tuned olfactory receptors can be used to discriminate differences in chemical compositions of complex mixtures. 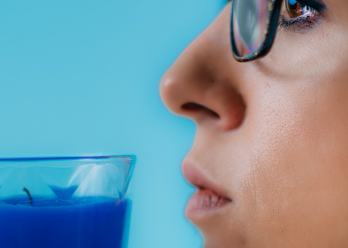