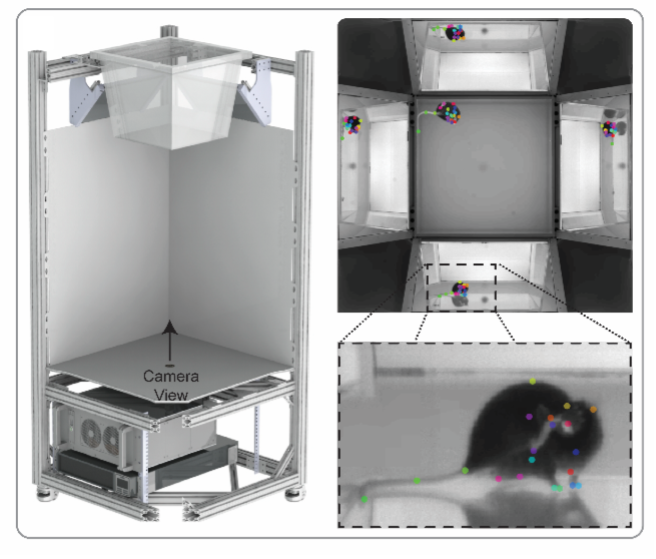 A major component of medical research and preclinical drug development is to identify subtle behavioral phenotypes in animal models. This has led to progress in studies of depression, anxiety, cognitive disorders, and neurological disorders. However, these trials and observations are frequently done by hand that can be subject to errors and variability introduced by the observer and limit assays to coarse-grain measurements. Additionally, these observational setups can be time-consuming and difficult to setup. Most of the observational cages on the market that allow for more objective and standardized observations of behavioral phenotypes are limited to 2-dimensional data acquisition. There is a need for a device that captures 3-dimensional behavioral phenotypes at a fine-grain scale that allows researchers and scientists to differentiate subtilties in movement and behavior among experimental groups to better understand responses and potential effectiveness of various drugs.

Duke inventors have developed a device and methods for tracking fine-scale movements of animals in 3D. This is intended to be used to study behavioral responses to different treatments and drugs both in research laboratories and in preclinical trials. Specifically, the device is a 30” x 30” arena designed with a single camera mounted at the base and 5 mirrors to capture lateral views and a bottom-up view of the subject. From this view, visualization of paws, the mouth, and tongue are possible. The setup itself, with a standardized chamber and fixed mirrors, allows for easy reproducibility of settings across subject replicates. In this way, an observer can obtain positional information of the subject in 3D space, key for having a complete depiction of an animal’s behavior and for reducing noise and error. This has been demonstrated in a head-to-head comparison where subjects given two treatments were observed and behavioral differences were recorded because of the ability to obtain fine-grain kinematic information. These behavioral differences were not resolved out using coarse scale assays.