/ Technology / Augmented Reality for Neurosurgery
Back to available technologies

Approximately 30% of the 3.5 million epilepsy patients in the United States struggle to control seizures despite receiving existing treatments. These patients often undergo neurosurgery to help alleviate their symptoms. Surgical planning involves taking extensive structural, functional, and electrical scans of the brain to identify a region to remove during surgery, known as the resection area. Compared to other forms of neurosurgery, where abnormal growths or tumors can be easily identified and removed during the procedure, implementation of surgical approaches to treating epilepsy are particularly challenging because the area for resection cannot be identified by the naked eye. Additionally, the area must be removed precisely to prevent damage to healthy brain tissue. The current approach to identifying the resection area during surgery involves visualizing 2D slices of brain scans on external monitors and mentally cross-referencing these images with 3D patient anatomy, which can be extremely challenging. Therefore, there is a need for a technology that can provide surgeons with intuitive, informative, 3D renderings of the patient’s brain during surgery, in real time.

Duke inventors have developed a technology that uses headset-mounted augmented reality to help surgeons visualize preoperative plans in a sterile and interactive manner during neurosurgery. This is designed to improve workflow of the surgery by providing easily accessible and navigable visual information that will help the surgeon identify the resection area accurately. Specifically, this technology allows the user to project a moveable and interactive 3D model of the patient’s brain around the operating suite and overlay preoperative plans and images with the patient’s brain anatomy in real time during the procedure. This technology also allows for ease of communication with other relevant personnel during the procedure, such as neurologists. This technology has been shown to successfully generate interactive patient-specific 3D models of the brain, with heatmaps that highlight seizure focus regions and resection areas. Additionally, the ease of use of hand gestures to navigate and interact with the model has been demonstrated with a prototype.

This technology would also be highly impactful for other surgical applications where easy access to preoperative plans and communication with other physicians are crucial to success, such as for cardiovascular applications. 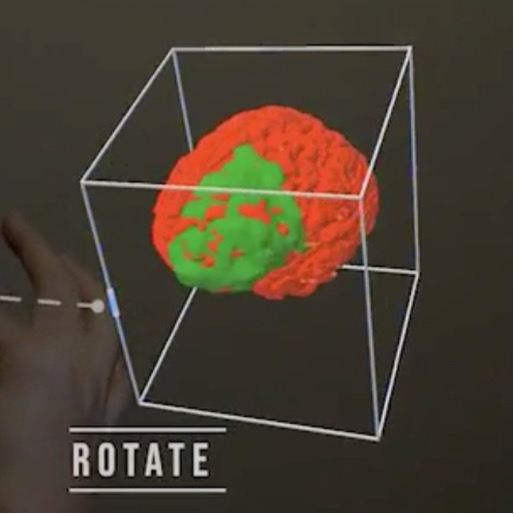