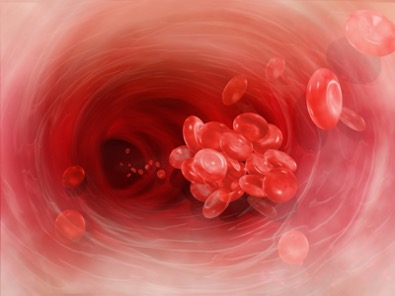 Extracorporeal membrane oxygenation (ECMO) is a life-saving treatment for critically ill patients with low oxygen levels. During ECMO, the patient’s blood flows through an external oxygenation device. This requires co-treatment with an anticoagulant to prevent the patient’s blood from clotting inside the device. However, current anticoagulant therapies cause excessive bleeding in over half of ECMO patients, which leads to patients needing blood transfusions and increases the risks of ECMO for patients who have injuries or need surgery. The current gold standard of anticoagulant therapy for cotreatment with ECMO is unfractionated heparin. However, heparin treatment does not fully prevent ECMO-related clotting, and it depletes thrombin, the molecule that initiates clotting. This leaves patients susceptible to high rates of bleeding complications and an inability to clot, particularly in children. Therefore, there is a need for an anticoagulant therapy that prevents ECMO-related clotting but allows natural clotting and healing at wound sites, reducing the need for transfusions and making ECMO safer for patients.

Duke inventors have developed a new aptamer, DTRI-178, that is an effective anticoagulant with reduced risk for patient bleeding. This therapy prevents ECMO device-related clotting, but allows the body to clot and stop bleeding when it needs to, such as during surgery. Aptamers are short, folded strands of DNA or RNA with a specifically-engineered shape that allows them to interact with other biomolecules, such as proteins, and regulate biological activity. Aptamer DTRI-178 prevents clotting through an alternative mechanism that prevents binding of clotting factors rather than depleting their numbers, specifically by binding to clotting factor IXa. The inventors have demonstrated that DTRI-178 is as effective as heparin at preventing clotting in a piglet model of pediatric ECMO, but has fewer side effects of bleeding at surgery sites. Efficacy has also been demonstrated in whole blood samples from COVID-19 patients on ECMO support.

This technology could also be used as a safer anticoagulant therapy for intravenous medical devices and catheters, or after surgical implantation of cardiovascular devices such as pacemakers and artificial heart valves.