Transparent conductors are necessary components for smartphones, organic photovoltaics (OPVs), organic light emitting diodes (OLEDs), flat panel displays, and touch sensors. Indium tin oxide (ITO) is the chief material utilized for this purpose due its low sheet resistance at high transmittance values. However, indium is a scarce and expensive starting material, and the brittle ceramic nature limits its use in flexible applications. Additionally, the vapor phase sputtering process required to fabricate ITO electrodes results in higher final costs. Silver nanowires are an emerging promising alternative to ITOs but is still a limiting option due to scarcity and cost of silver. There is a need for an ITO alternative that can be coated from solution without compromising optoelectronic performance.

Inventors at Duke have developed a process for producing noble-metal coated copper nanowires intended for use in transparent conducting films. Specifically, this is a room-temperature solution-phase process in which ascorbic acid is used to remove the passivating copper oxide coating from the copper nanowires and reduce the noble metal ions onto the surface. The copper-silver nanowire demonstrated improved resistance to oxidation compared to uncoated copper nanowire and maintained optoelectronic properties compared to silver nanowire. The inventors further demonstrated that copper-gold and copper-platinum core-shell nanowires could be produced. 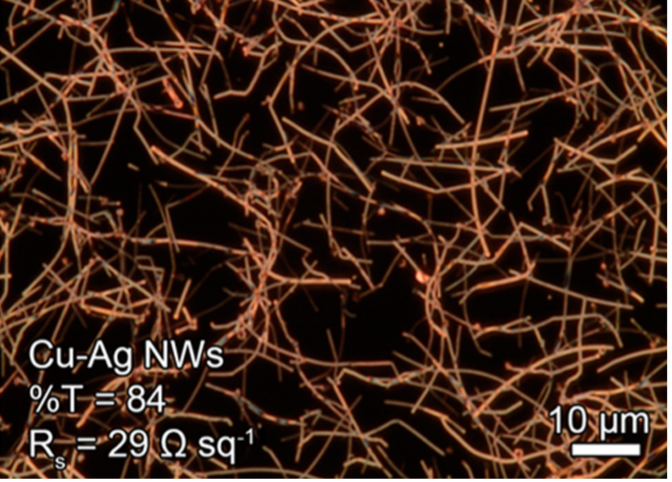