Diabetic retinopathy (DR) is the leading cause of blindness in working age adults affecting approximately 100 million people worldwide. Studies show that early detection and treatment can reduce the risk of blindness by 95% in patients with DR. It is therefore recommended by the American Diabetes Association and the American Academy of Ophthalmology that all type 1 and type 2 diabetic patients have a comprehensive eye exam performed annually to screen for early signs of DR. Unfortunately, DM patient compliance rates with eye exams are low, often reported as under 50%. Thus, health insurance plans are highly incentivized to ensure that their DM patients receive annual eye exams. The requirement for DR screening can be met by acquiring a fundus photograph and having this photograph interpreted by a qualified professional. This has spurned the creation of several telemedicine DR screening companies who send technicians to visit patients in their homes, or in community clinics, to acquire images with handheld fundus cameras (HFCs). These images are then interpreted remotely by an ophthalmologist, typically through a dedicated reading network. Unfortunately, gradeability rates of images acquired with HFCs are poor, largely due to glare and vignetting. Many of the causes of poor gradeability rates with HFCs can be significantly improved using CSLO. Unfortunately, commercially available CSLO technologies are too bulky and too expensive for use in telemedicine and remote screening applications.

Duke inventors have reported a confocal scanning laser ophthalmoscope (CSLO) intended for remote screening and telemedicine applications either as a handheld device or mounted on a portable chin rest. This technology is based on a more generalizable imaging approach called confocal scanning laser microscopy (CSLM). The small-footprint system topology was achieved by employing a time-division spectral multiplexing scheme that reduces complexity and cost. A working prototype has successfully imaged a healthy human volunteer.

This invention is not limited to CSLO applications and is generalizable to other forms of polychromatic point scanning imaging systems, including but not limited to confocal scanning laser microscopy (CSLM). 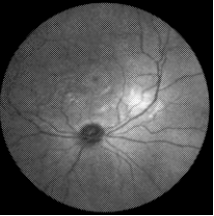