A class of biodegradable stealth polymers to improve drug delivery

Delivery of drugs or therapeutics such as small molecules, peptides, and proteins, in their native form, is limited by their poor stability, low solubility, and short in vivo circulation. These challenges in drug delivery lead to decreased therapeutic efficacy and increased risk of off-target toxicity. Various materials, mostly synthetic polymers like polyethylene glycol (PEG), have been previously designed to deliver drugs. The “stealth” properties of PEG improve solubility and stability of drugs, and reduces their premature clearance from the subject, making PEGylation—the process of attaching drugs to PEG—an important method in the pharmaceutical industry. There are, however, three major shortcomings that undermine the reliability of synthetic polymers as drug delivery vehicles. First, it is well documented that repeated exposure to PEG can produce PEG-specific antibodies that trigger adverse immune responses. Second, synthetic polymers are non-biodegradable, and their effect in vivo post drug delivery is not well understood. Third, intrinsic polydispersity associated with synthetic polymers can lead to a population of drug conjugates with different biological properties, especially with respect to the half-life and immunogenicity. There is a need for efficient delivery of drugs with improved biocompatibility, solubility, stability and half-life, and reduced toxicity.

Duke inventors have developed a class of stealth polymers that are conjugated to drug molecules to improve their delivery. Specifically, these are zwitterionic polypeptides (ZIPPs) that incorporate a zwitterionic sequence within an intrinsically disordered polypeptide motif that impart behavior akin to synthetic stealth polymers like PEG. The inventors have demonstrated that fusing a ZIPP sequence to a peptide drug used for treatment of type-2 diabetes, GLP1, outperformed an uncharged polypeptide of the same molecular weight in a mouse model of type-2 diabetes. The ZIPP technology has also been demonstrated to increase the half-life of paclitaxel by 17-fold compared to free paclitaxel. Treatment of mice with a single dose of ZIPP-paclitaxel nanoparticle led to near-complete eradication of highly aggressive prostate or colon cancer tumors. 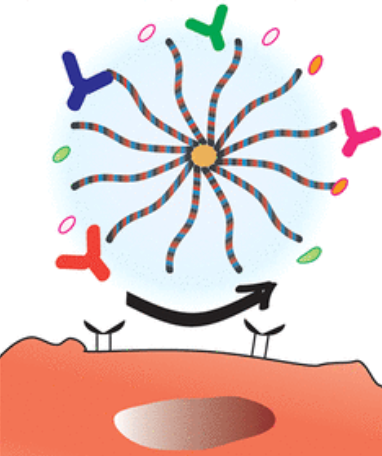