There is an ongoing effort to develop transformative cancer research platforms for phenotypically stratifying the known landscape of cancer mutations from unknown entities into actionable cancer drivers. Models are needed that can recapitulate the cellular and genetic heterogeneity of disease, can enable real time visualization of cellular behavior at a single cell level, and can provide predictive preclinical models for testing therapy. The proposed technology describes a platform capable of doing just that.

The described technology (called Cancer Rainbow or “Crainbow” platform) enables the production of reliable on-demand mouse models for quantitatively comparing multiple driver genes and visualizing their effects on cell fate. Optimized and unique fluorescent barcodes are co-expressed with potential cancer driving mutations. The mutations can be induced at will using a Cre-recombinase system. Thus, after activation of cancer driver genes, high resolution imaging of tumor cells serves as a proxy for visualizing cell fate, fitness, and tumorigenesis. The Crainbow platform provides a plug and play platform for assembly of Crainbow vectors in less than ten days and the subsequent generation of Crainbow mice in under six weeks. The platform has been extensively validated by the inventors using three different prototype crainbow mouse models and a Her2 breast cancer model. The data show that different mutations compete and the progression can be monitored and quantified.

There is an urgent need for understanding cancer-driving gene mutations and developing the necessary mouse models. The Crainbow platform offers a solution to the cancer research community by providing a plug and play platform for fast and efficient cancer mouse model development that can be implemented by researchers around the world to understand the mutations driving cancer and to develop novel therapies. There is currently no commonly accepted and reliable method for producing mouse models that allow multiplexing and cell fate mapping. 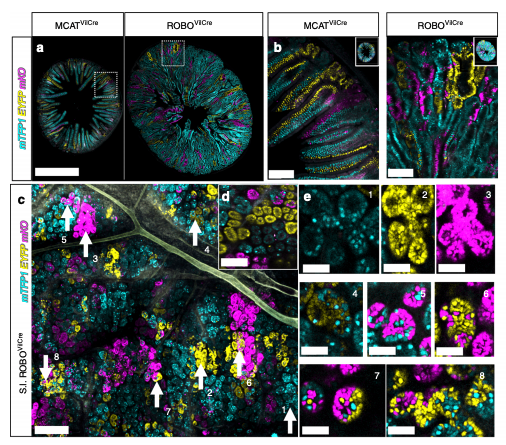