Researchers at Duke University have engineered a workaround to make ventilators safer and more efficient when splitting them between patients.

With a set of biocompatible 3D-printed parts to control the amount of air being pushed to each patient and hundreds of thousands of hours of complex computer simulations to decide which of those parts to use, the innovative system has been submitted for emergency FDA approval for use.

“One of the early needs to emerge during the pandemic was the need to ventilate patients, and the volume of ventilators needed has stressed many cities around the world,” said Muath Bishawi, a resident in cardiac surgery pursuing a PhD in biomedical engineering at Duke. “One strategy to meeting this demand is using T or Y connectors to put two patients on one ventilator, which technically should work, but comes with its own challenges. We wanted a system that, if it were ever needed at Duke or anywhere else, could restore some of the ventilator’s patient-specific features.”

A ventilator is a complex machine that pushes air into a patient’s lungs at specific pressures, volumes, respiration rates and oxygen levels. It typically interacts with the patient it is supporting, automatically sensing if it is providing air volumes that could cause injuries or if a patient begins breathing on their own.

But when a ventilator is split between multiple patients, it loses a lot of its safety alarms and metrics because it can no longer sense and respond to a single patient. It becomes a much dumber machine that does a single task—push oxygen-rich air through a tube at whatever rate the medical staff sets it at.

But when a ventilator is split between multiple patients, it loses a lot of its safety alarms and metrics because it can no longer sense and respond to a single patient. It becomes a much dumber machine that does a single task—push oxygen-rich air through a tube at whatever rate the medical staff sets it at.

This presents a problem when different patients have different respiration requirements.

“Think of two balloons, one with a thick wall and the other with a thin wall. If you try to inflate both with the same level of effort, the thin-walled balloon is going to get much larger,” said Bishawi. “This is the same challenge faced with patients’ lungs. They have different levels of compliance. The same filling pressure of air that is perfect for one might not be enough for someone else or might even overinflate their lungs.”

One solution, then, is to find a way to tailor the airflow for each patient without having to rely on the ventilator to do the heavy lifting. That’s where Bishawi’s training as an engineer kicked in.

Earlier in his medical career, Bishawi took part in an experimental class designed to bring students together from all corners of Duke to explore solutions for unmet clinical needs. Students spend time watching clinicians work, ask questions about how and why certain things are done, brainstorm shortcomings that might be ripe for an entrepreneurial solution, and then get to work on designing, prototyping, completing market research and implementing a business plan. 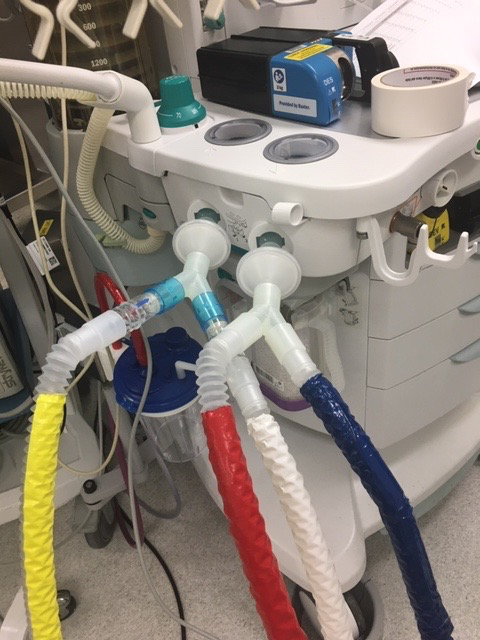 Ventilator splitters with the new 3D printed resistor pieces installed to ensure the safety of each patient.

That class was a precursor to what has now become the Duke Design Health Fellows program, of which Bishawi is now an advisor.

“I’ve basically been a clinician supported to live in and breathe an engineering world for the past four years,” said Bishawi, who has recently successfully defended his PhD thesis. “I know our engineers, what their capabilities are and how to speak the language. This program and others between the medical and engineering school are what have allowed this project to take off so quickly and at such a high level.”

Putting on his engineering cap, Bishawi came up with an idea to help restore some of the personalized functionality of a ventilator when it’s split between two patients. He wondered about using resistors that can restrict airflow, ensuring each patient is receiving the proper amount of pressure. This idea was inspired by what he learned about flow and resistance from his PhD advisor George Truskey, a world expert on fluid flow, and whose course he took years before. But to ever be useful in a clinical setting, health care providers would have to know with confidence which restrictors should be used with each patient.

Spending a Weekend in the Cloud

To help solve this challenging problem, Bishawi turned to an engineer he had worked with on a previous project, Amanda Randles, the Alfred Winborne and Victoria Stover Mordecai Assistant Professor of Biomedical Sciences at Duke. Randles has spent the past decade developing a highly parallel computing algorithm capable of simulating blood flow on a cellular level. But air is a liquid too, so Bishawi asked if she could adapt her program to simulate air flow through a ventilator and patients’ lungs with different levels of compliance.

Randles got to work with Michael Kaplan, a medical student working in her laboratory, and Simba Chidyagwai, a PhD candidate in her laboratory. The catch: They would need 500,000 hours of runtime on one of the largest cloud servers in the world to solve the problem. 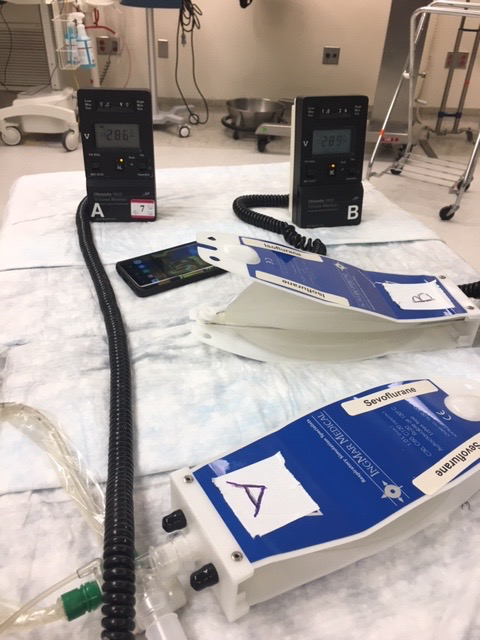 An experimental setup texting the 3D-printed resistor pieces with bags that act like human lungs to make sure the ventilators are still supplying the correct amount of pressure to each.

“I reached out to Duke’s Office of Information Technology to see if they could help me find the computational power to pull this off,” said Randles. “That was on a Wednesday.” Within 48 hours, they had secured the time on Microsoft Azure, whose support team worked with Randles’ team through a weekend making sure the runs went smoothly. “You really need established relationships and trust to make that happen,” she said.

At the same time, Bishawi reached out to Ken Gall, associate dean for entrepreneurship at Duke Engineering, for help with figuring out how to 3D-print resistor pieces that meet the biocompatibility, toxicology and design standards required. Gall, in turn, connected Bishawi with one of his Durham-based startup companies, restor3d, which works with surgeons to improve the reconstruction and repair of the human body through metal and polymer 3D-printed implants with enhanced anatomical fit and superior integrative properties.

With the help of Nathan Evans, Michael Kim and Rajib Shaha at restor3d, the growing collaboration rapidly produced prototypes for different scenarios and came up with tentative protocols for using them. The devices were produced on low-cost, benchtop machines which utilize a form of 3D printing known as stereolithography (SLA). They also produced a series of prototypes and tested them on ICU ventilators as well as operating room ventilators. Also helping with this effort was a group of Duke anesthesiologists, including David MacLeod and Anne Cherry, as well as respiratory therapist Jhaymie Cappiello.

Duke is making the data and specifications freely available to hospitals facing ventilator shortages due to the COVID-19 pandemic. If a hospital has access to fabrication facilities and an operational quality system, they will be able to use the specifications to build the product for their own internal use. Alternatively, once emergency FDA approval is granted, restor3d will have capacity to provide products for hospital systems that do not have their own internal capabilities.

“This clinical team was phenomenal,” said Bishawi. “We met multiple times a week for a few weeks and completed a series of sophisticated testing to develop clinically relevant test data to both validate the model and provide clinicians with important data on safety features.”

After settling on a design, the group then turned to Corey Campbell from Legend Technical Services, who completed biocompatibility testing for free, and William Wustenberg, DVM, president of Mycroft Medical LLC, who completed the toxicology risk assessment, also free of charge.

There’s an App for That

With tested devices and thoroughly vetted data on how best to use them, all that was left was to get the information out to those who need it. And thanks to Don Shin, chief technical officer at CrossComm, there’s now an app for that.

“We wanted to make this tool as safe and user friendly as possible,” said Bishawi. “CrossComm developed a beautiful app that uses the computer model data to make sure the ventilator splitters and resistors are easy to use.”

Roughly 100 terabytes of computational data computed on the Microsoft cloud network was distilled into a chart just a few gigabytes large that can be accessed by the app. Clinicians simply put in the required data about their patients and ventilators, and the app spits out the best combination of resistors to use to ensure both are receiving the correct amount of air. Because the calculations have already been done, the response time is immediate. And because the app draws from data kept on the cloud, the team can update their charts as more data becomes available and users begin to provide feedback.

Now FDA clearance is needed for hospitals to begin using the innovation. To help spread the word, the collaboration worked with Duke’s Office of Translation and Commercialization, which helped patent the technology and app that will soon be freely available to anyone who needs it during the pandemic.

“Duke is lucky in that we haven’t had to resort to splitting ventilators,” said Bishawi. “But we still might, so this is nice to have in our back pocket. And there are plenty of other hospitals around the world who might need our technology to help save lives. This is a last ditch effort when it is deployed, but that doesn’t mean it has to be without data, or a best effort to make it safer. This was our goal of doing this.”