Perhaps the worst thing about air travel is having to wade through congested airport security. Wait times at airports like Salt Lake City International and Washington Dulles regularly exceed half an hour on average, and that’s assuming folks follow TSA instructions.

Former Fidelis Security president and chairman Peter George, who was recently appointed CEO, said the funds will accelerate product development and the growth of Evolv’s marketing, customer support, and channel programs. “The active shooter epidemic is one of the greatest challenges facing our generation,” he said. “Evolv is the human security company that delivers the best approach to maintaining society’s freedom of movement while dramatically reducing threats.”

The Edge is able to scan more than 800 people per hour, said Evolv — slower than the 3,600 per hour the newer Express can scan but better than the 250 per hour of which conventional scanners are capable. That’s because you walk right through it — it doesn’t require you to slow down, pose, or take off your jackets or shoes, and its algorithms can distinguish in real time between common objects like cellphones and keys and potentially dangerous ones like firearms and explosives.

The sensors work in conjunction with computer vision-equipped cameras that identify people as they walk through the gate. Those who lack security clearance or who have a criminal record are flagged for review. And when a threat is detected by the system, it’s pinpointed on a video monitor for manual screening by a human employee. 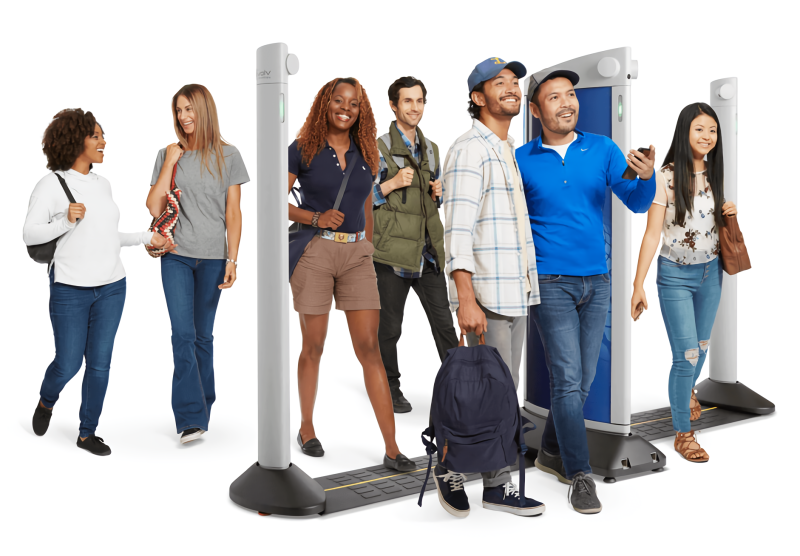 Above: The Evolv Express.

Evolv offers an optional facial recognition add-on — Pinpoint — that taps an IP camera to capture images of visitors’ faces and compare them to a localized or networked database. They’re processed in seconds and compared to multiple watch lists and employee rosters, including custom “be on the lookout” and VIP lists.

It remains unclear how the Edge’s threat detection rates compare to traditional checkpoints. A leaked 2015 TSA report revealed that Department of Homeland Security investigators managed to sneak weapons and fake bombs past airport screeners in an alarming 95% of attempts.

Evolv hasn’t made public the results of its pilot programs, but vice president of global solutions Chris McLaughlin said that the company is committed to a policy of transparency. “[The Edge] is based on an open architecture,” he told VentureBeat in a previous phone interview, noting that Evolv’s Cortex AI Software platform continuously improves scanning accuracy by uncovering new threat profiles. “We’re maintaining close oversight with engineers and scientists […] to validate [our] screening models.”

“Mass shootings in our country and Florida, like the ones that took place at Marjory Stoneman Douglas High School, the Pulse nightclub, and just this month at the Naval Air Station in Pensacola, are happening more frequently around the world,” Bush said in a statement. “Evolv has reinvented what’s required in physical security systems to protect innocent people. Outdated legacy systems just don’t meet the need.”